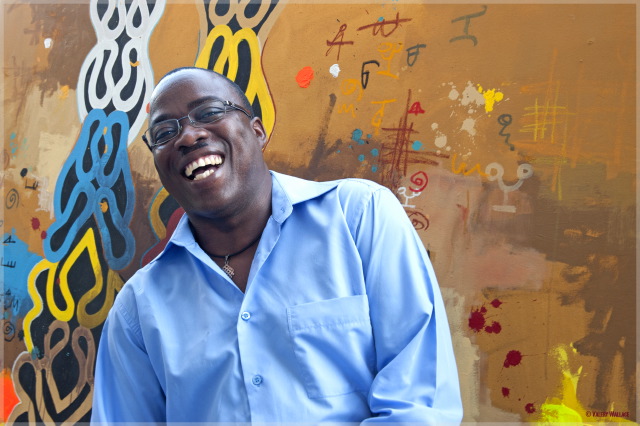 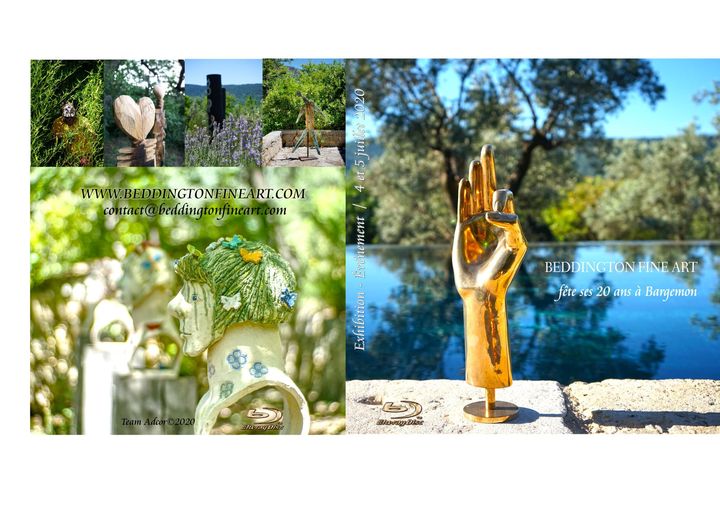 No one is certain of the exact date, but it most probably occurred in the primeval forests of Surinam one night in 1908. The negro, Afaka, of the Ndyuka tribe had a dream in which  the ghost of a white man appeared to him. The ghost ordered Afaka to devise an alphabet for the people of his tribe who at that time were illiterate.

In the days that followed, Afka realised that dream and designed his alphabet. Every two or three days he made a symbol, 56 in all. These symbols were phonetic syllable signs, with which could be written every possible N’dyuka word.

In the beginning, Afka kept his alphabet to himself, but the appearance of Halley’s Comet in 1910 was a sign to him that he should spread his knowledge of the alphabet. He was in contact at that time with missionaries, who made a number of attempts at converting the pagan Ndyuka to Catholicism. They saw immediately the importance of Afaka’s alphabet for the christianisation of these negroes, but a number of the tribal leaders did not wish them to gain access to it. Within the N’dyuka tribe, however, a core group always remained active in instructing and passing on  knowlegde of this alphabet.

The key to the alphabet is shown here, transcribed by Dubelaar and Gonggrijp in 1968. It lists all the Afaka symbols and their equivalent values. They can all be terminated on a nasal dipthong, as in ‘Nuan(g)’ (= eat-ing). 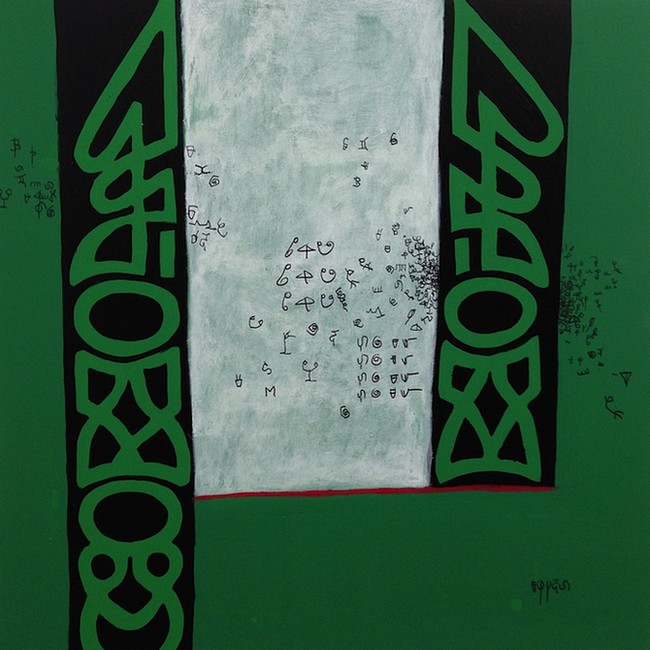 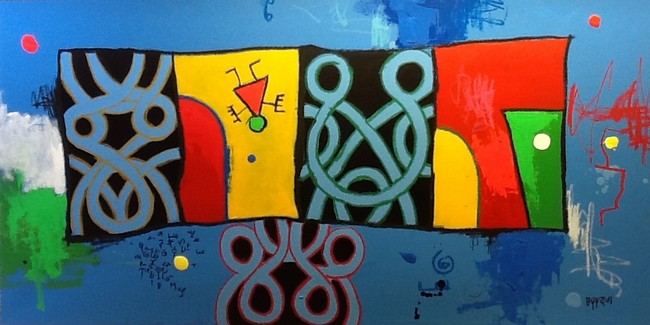 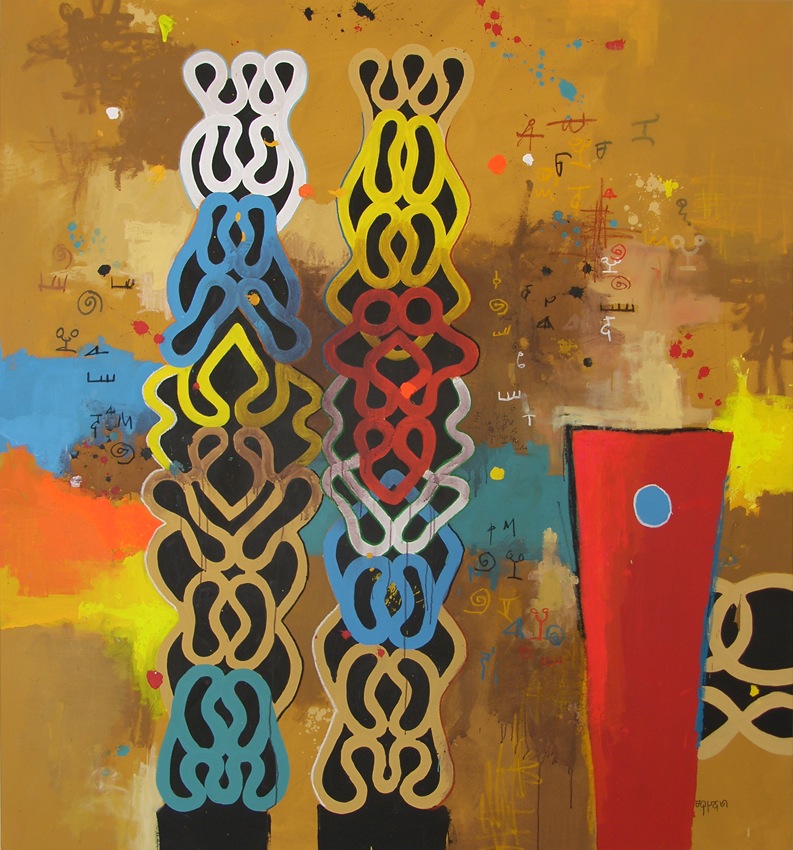 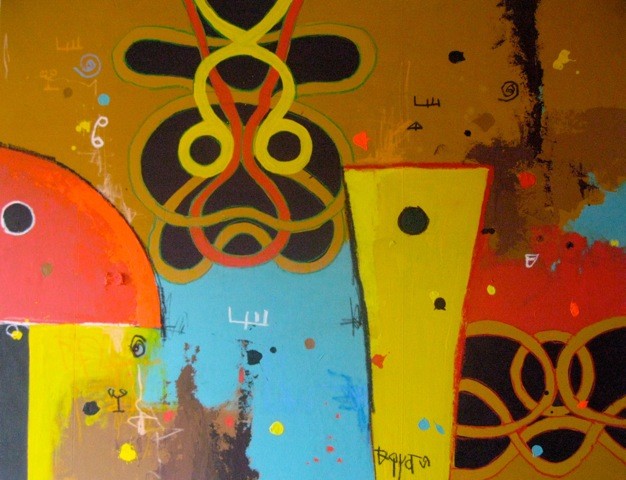 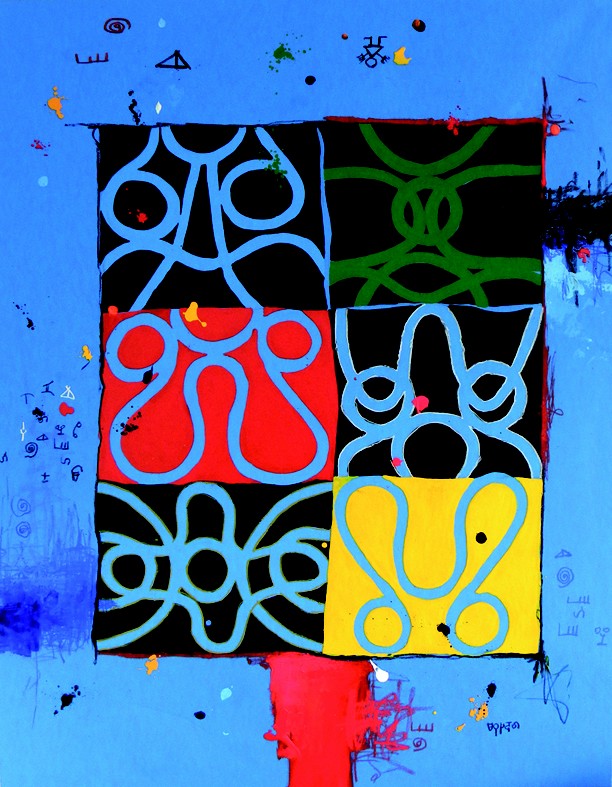 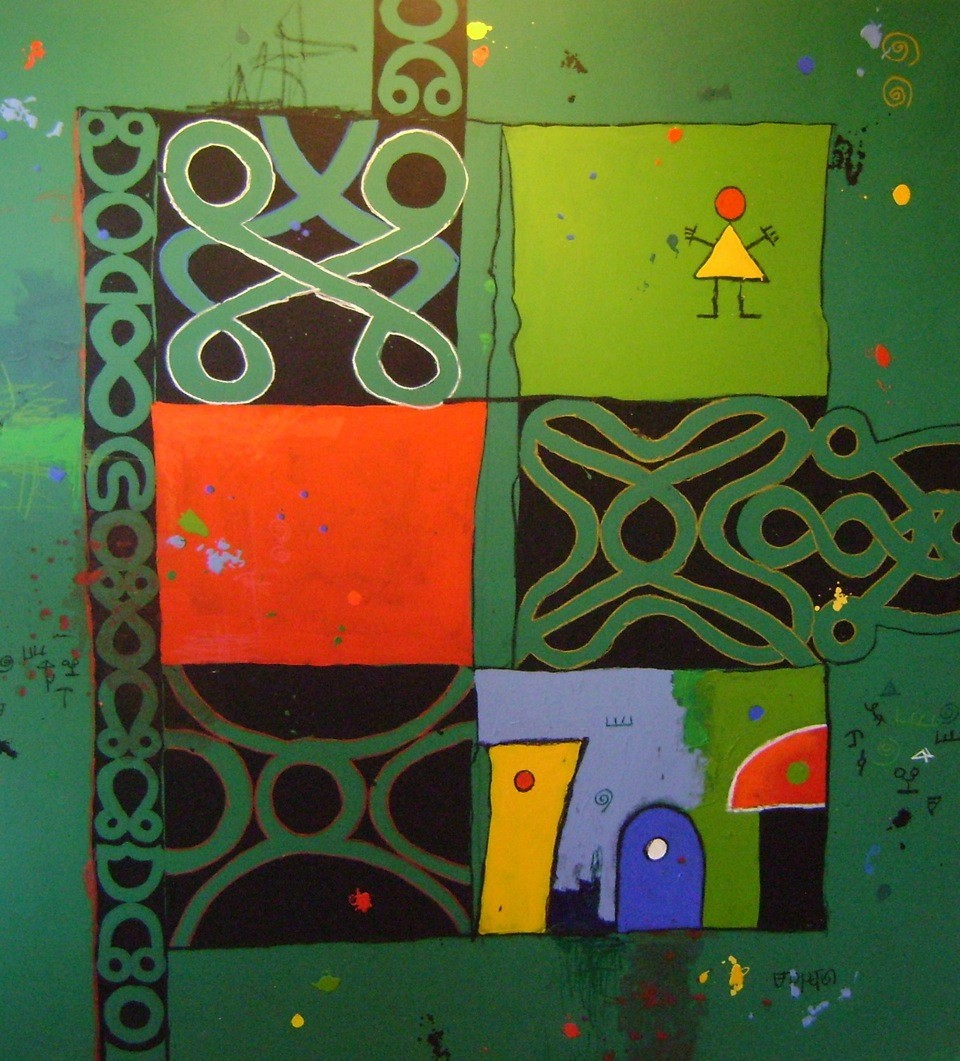 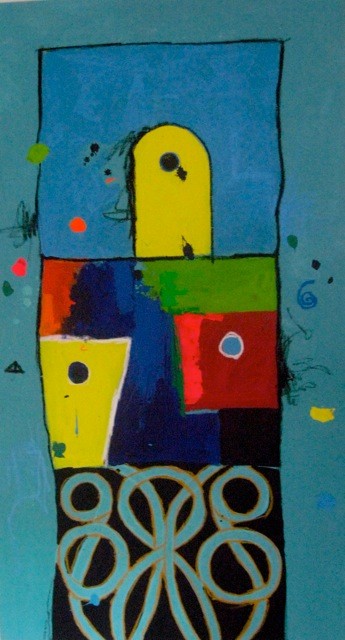 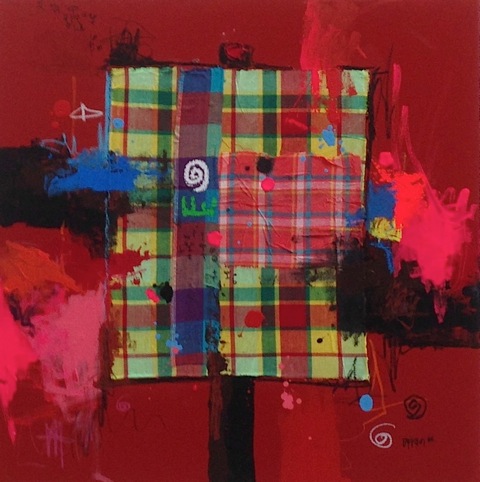 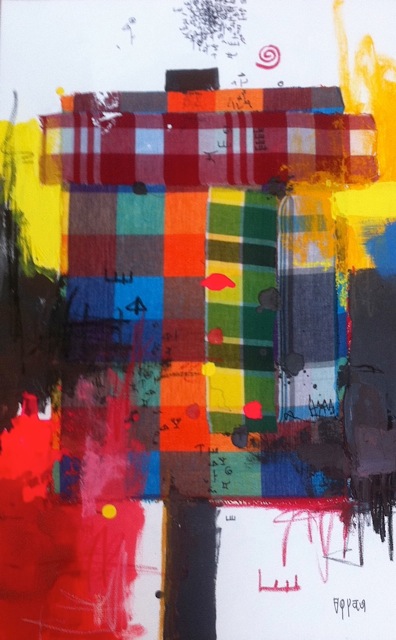 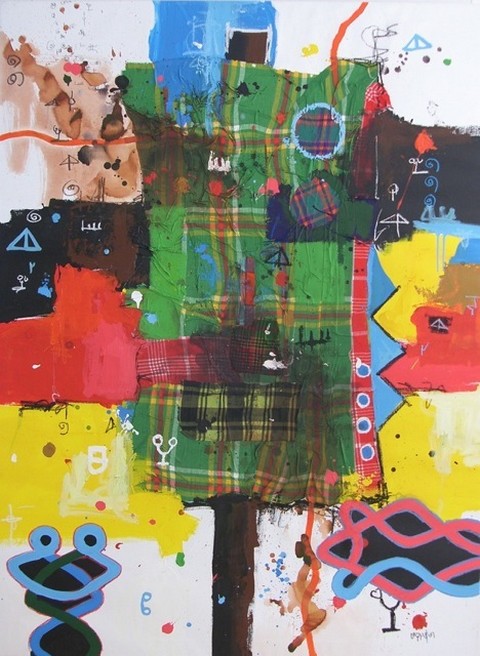 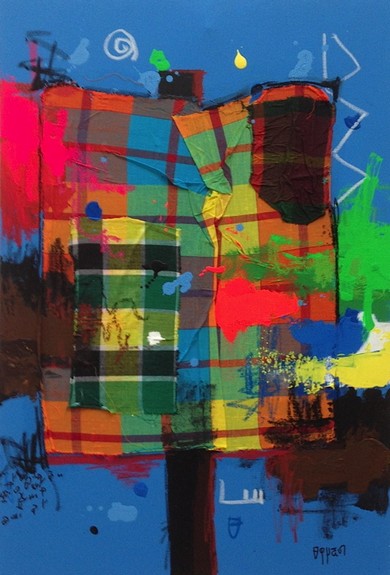 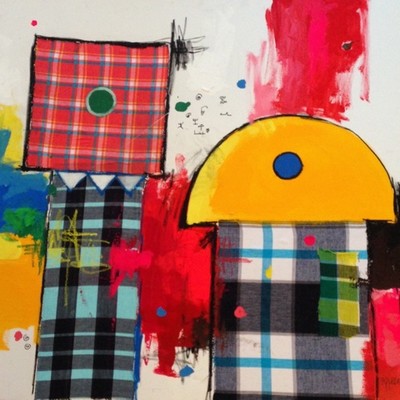 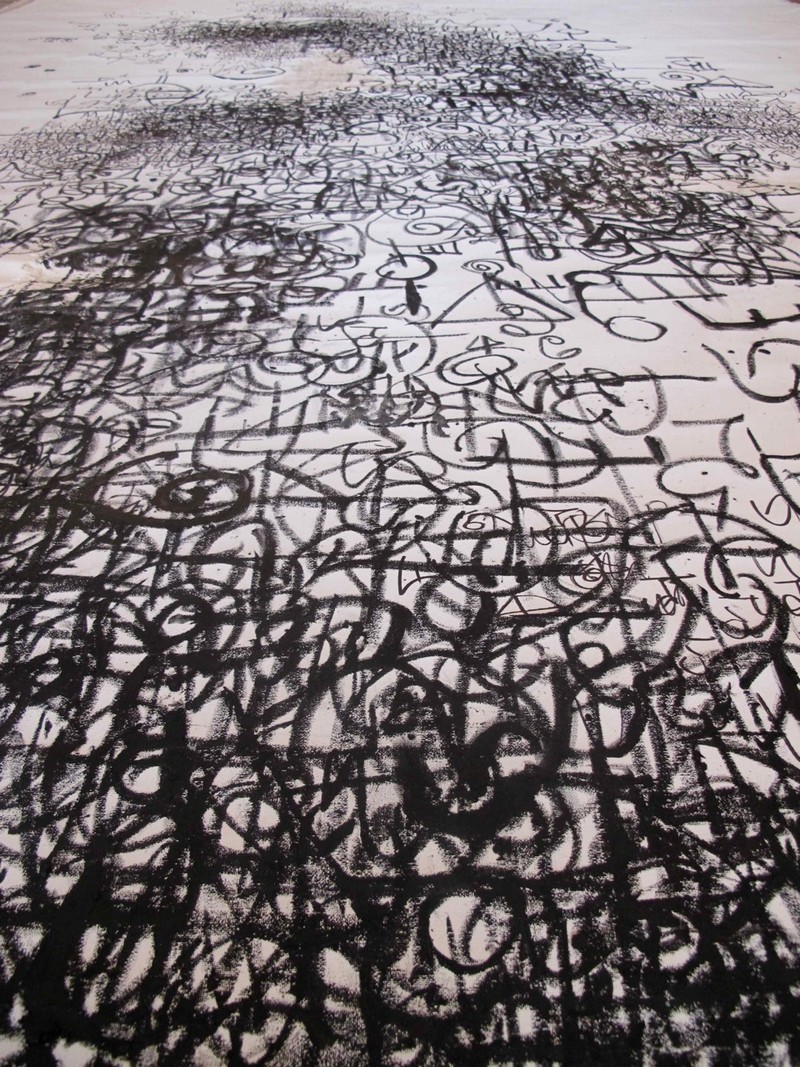 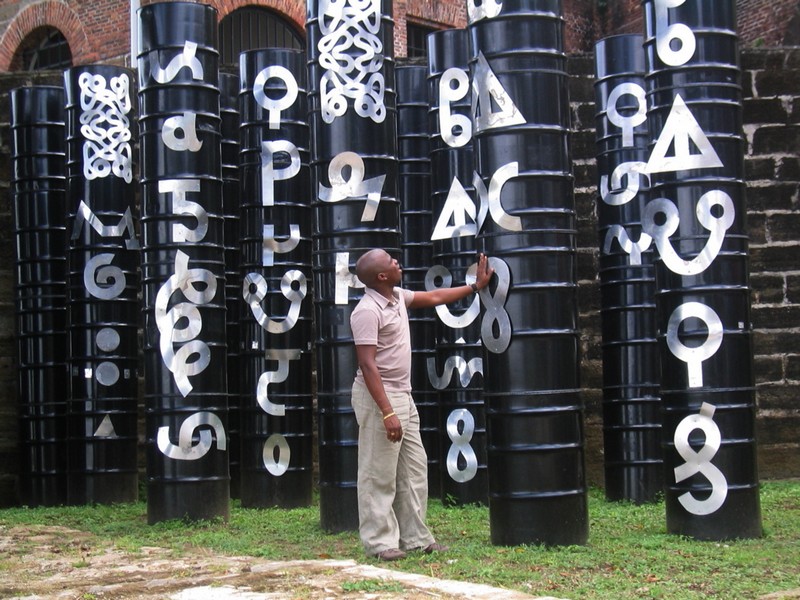 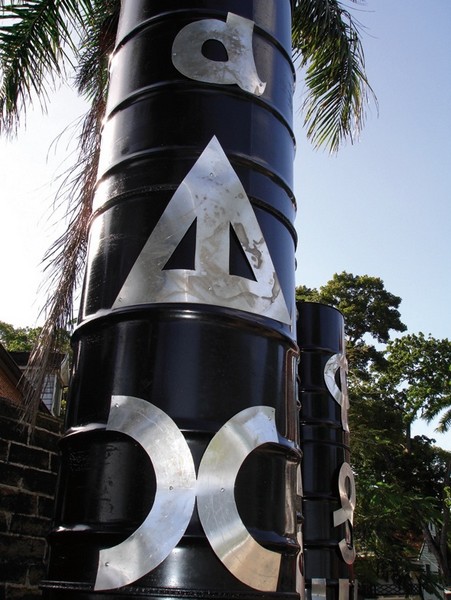 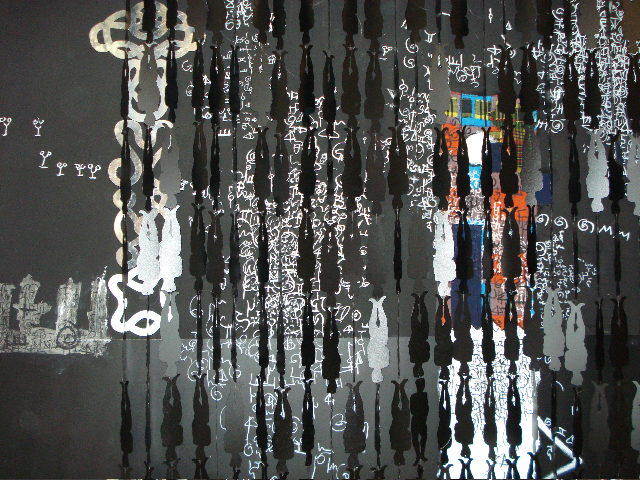 I chose ‘The Future’  as a title for this work, as I feel strongly that we as a people, must take the positive side of our history in order to make a better future.
The symbols used in this piece are from the Afaka script which was used as a means of communication by the Nyuka in Eastern Surinam around 1910-1920.
Evidently the blackboard symbolises school learning, and my wish is to educate people in this art and knowledge of the Maroon people.
The black figures are suspended ten cms in front of the blackboard and represent how black people were transported from Africa all over the world as slaves, a conciousness that will follow us in everything we do.
I hope to explain with this work that there is still hope no matter what our ancestors went through and that we, for our part, must make the best of our future.’
Marcel Pinas
J’ai choisi ‘The Future’ comme titre pour cette oeuvre, parce que je suis convaincu que nous, en tant que peuple, devons prendre le côté positif de nore histoire pour construire un avenir meilleur.
Les symboles utilisés sont ceux du script Afaka utilisé comme moyen de communication par les Nyuka dans l’est Suriname autour de 1910-1920.
Evidemment le tableau noir symbolise l’apprentissage scolaire, et mon souhait est d’éduquer les gens dans l’art et la connaissance du peuple Maroon.
Les figures noires sont suspendues à dix centimètres du tableau et représentent comment les Noirs étaient transportés de l’Afrique au reste du monde en tant qu’esclaves, une conscience qui nous suivra dans tout ce que nous entreprenons.
J’espère expliquer avec cette oeuvre qu’il y a encore de l’espoir malgré ce que nos ancêtres ont vécu et que nous devons construire positivement  notre avenir’. 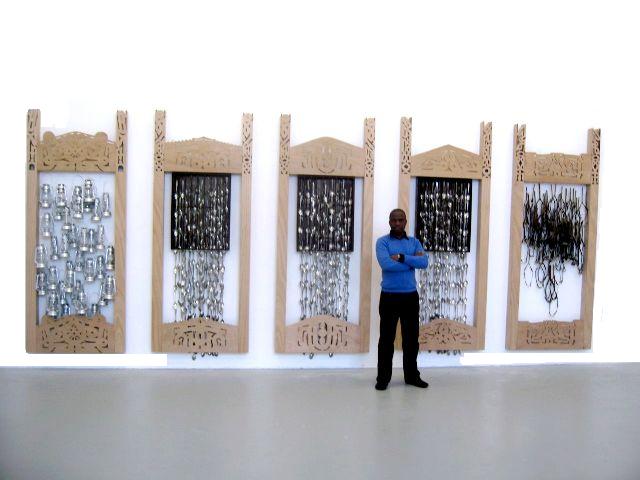 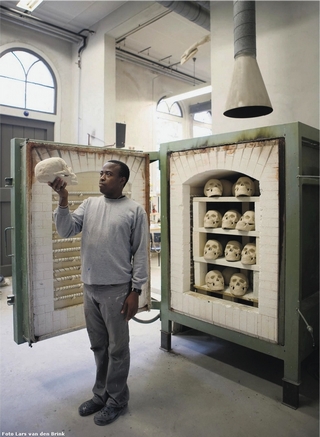 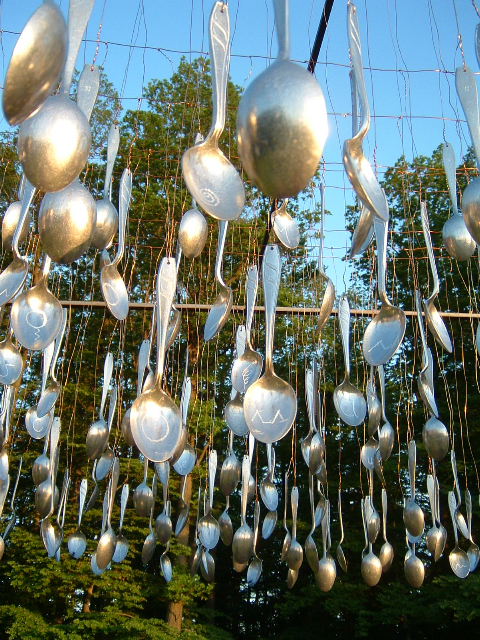 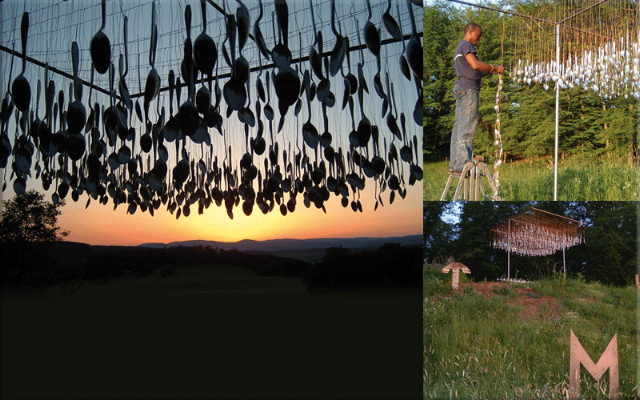 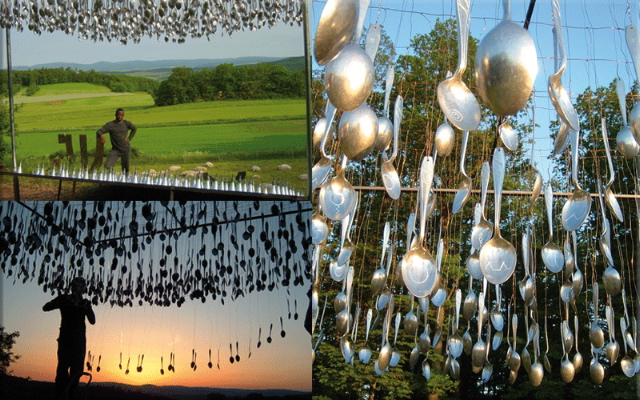 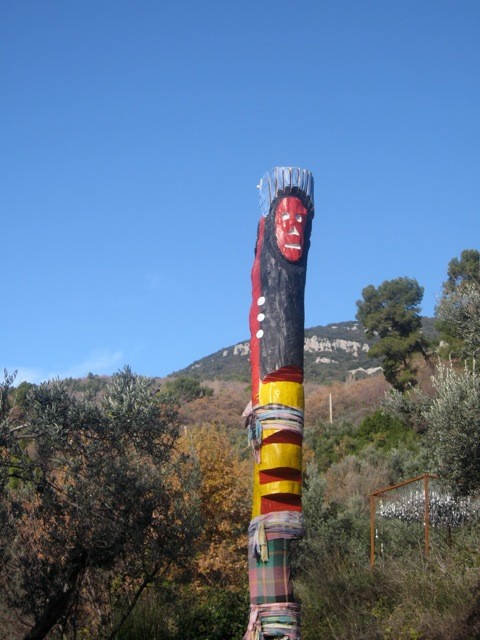 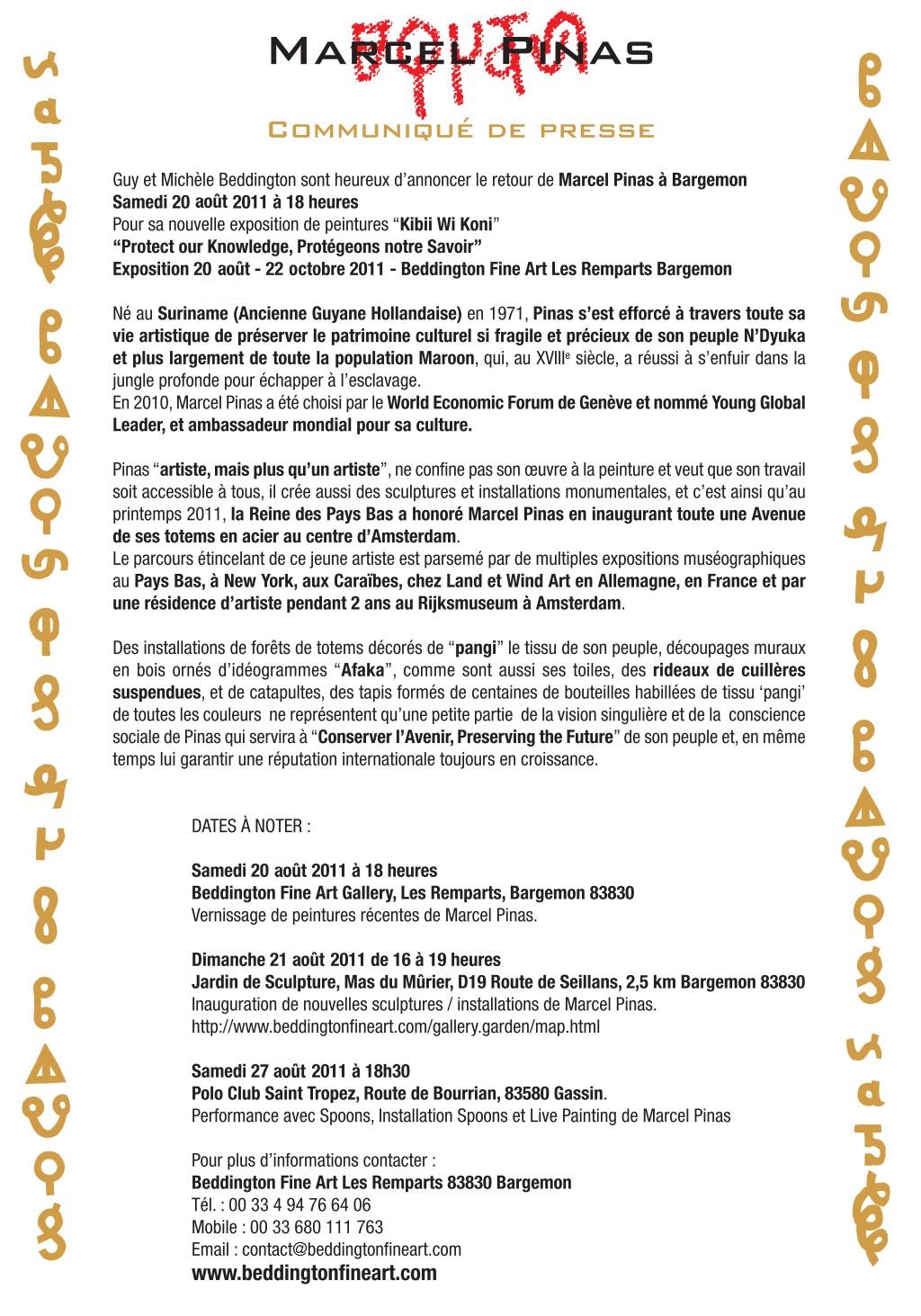 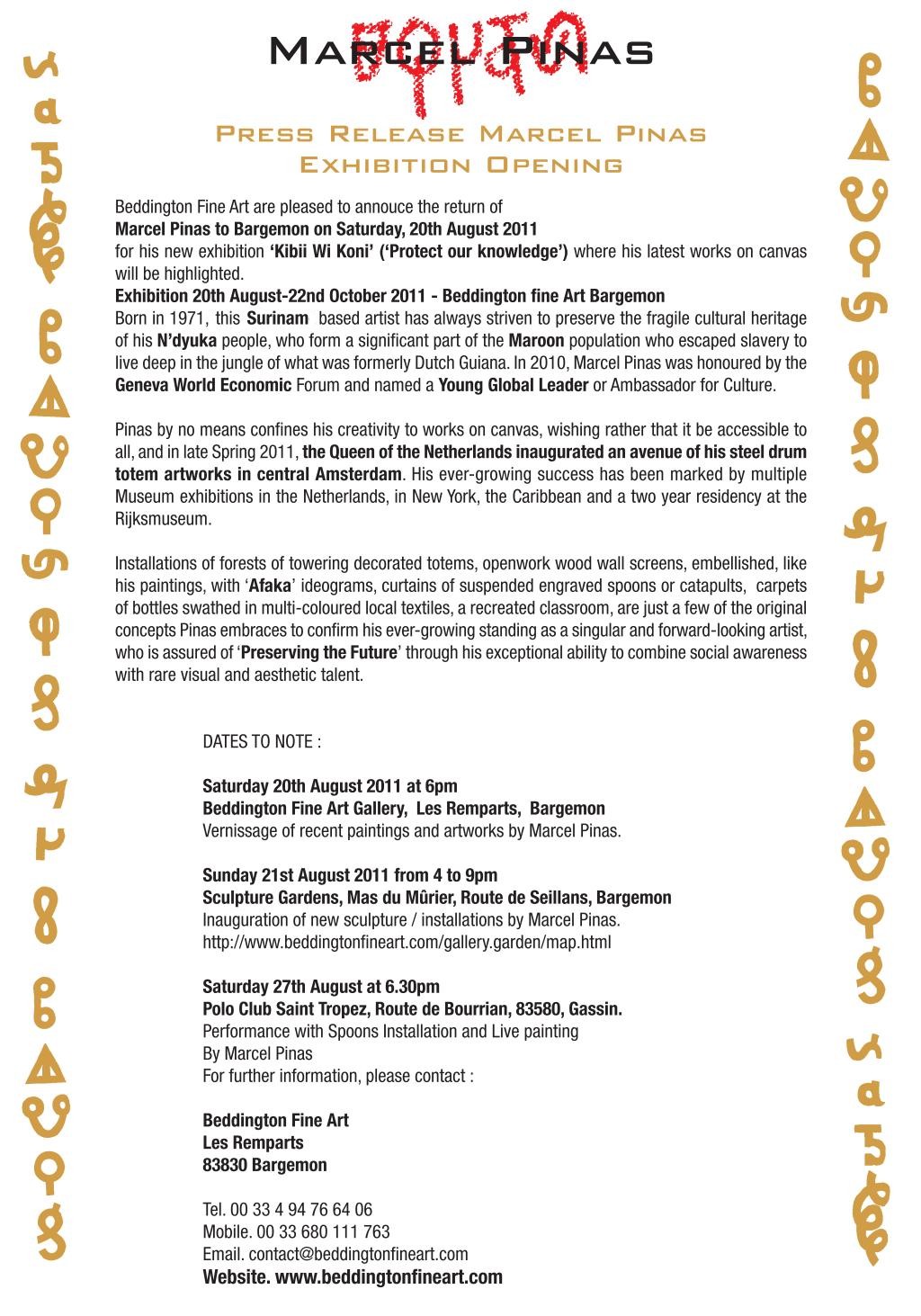 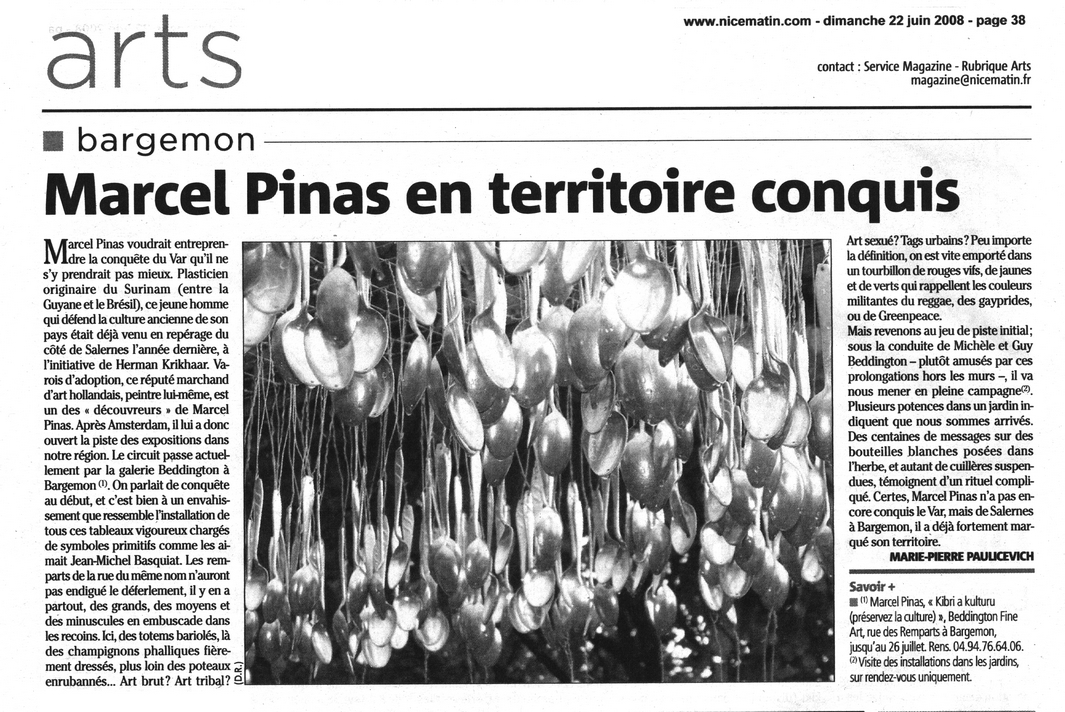 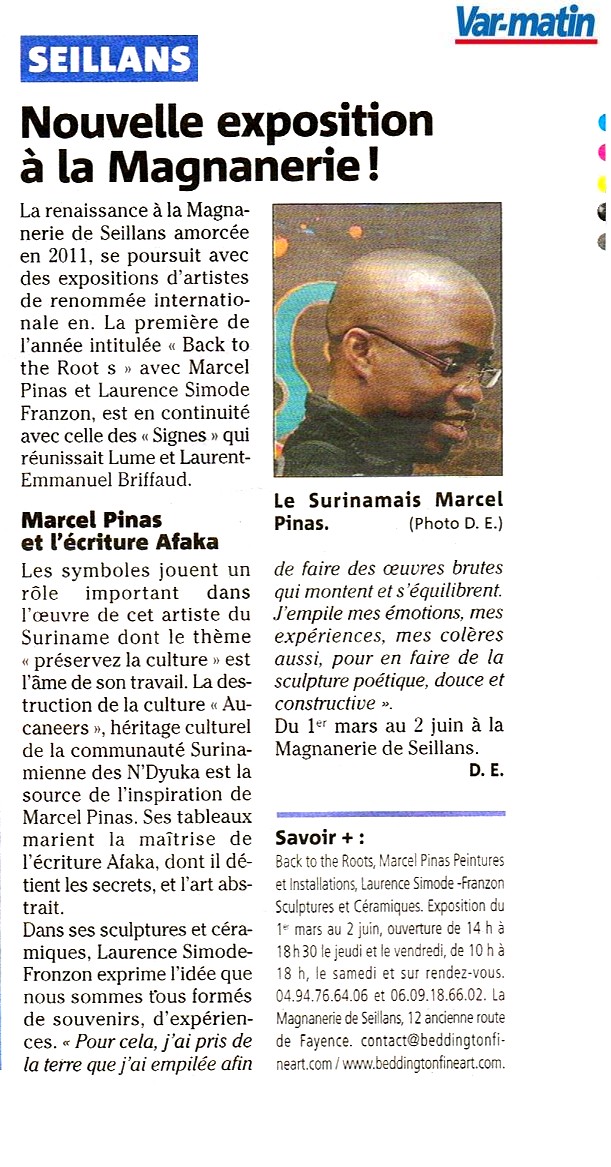 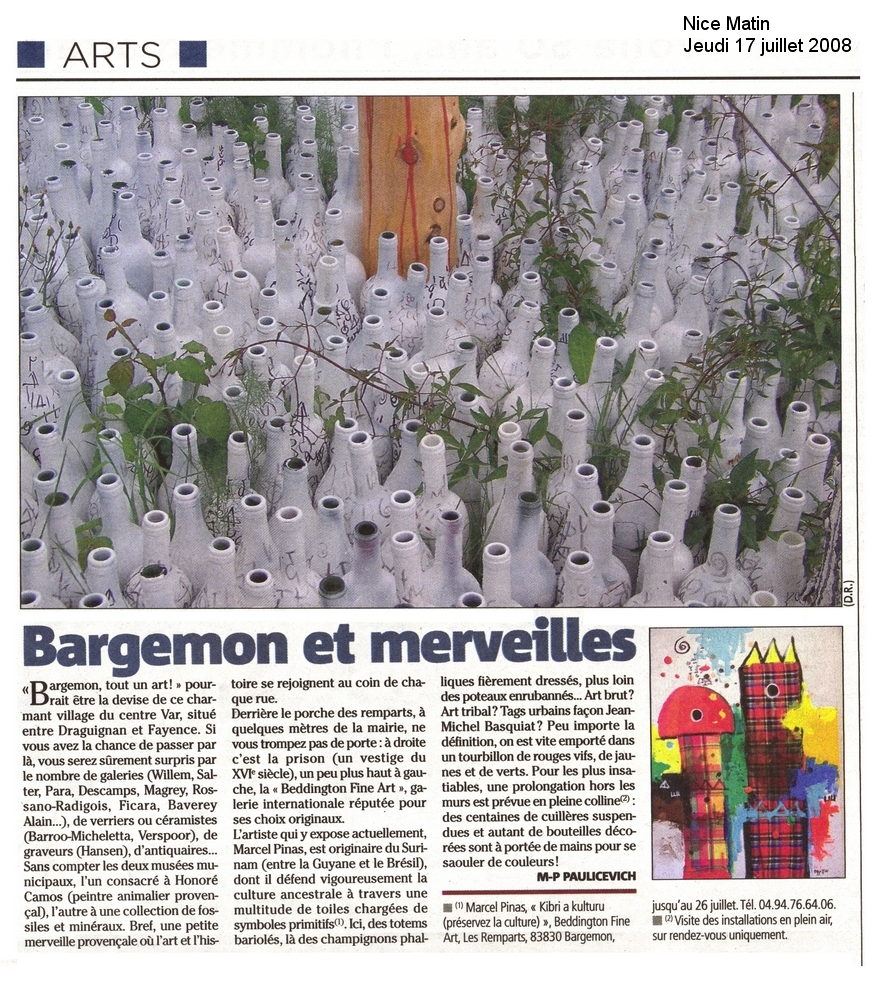 ‘Kibri a culturu’ or ‘preserve the culture’. This theme is the soul of the work of the Surinamese artist Marcel Pinas. The cultural heritage of the Surinamese maroon community of the N’dyuka, also known as the Aucaners is Marcel Pinas’ source of inspiration as well as his motive.
‘My art is about experiences from the past ; it deals with the destruction of the N’dyuka culture in Surinam; in my work I express that situation, paying attention to the protection of cultures in general. I focus on the N’dyuka because I am a descendant of the N’dyuka of Surinam.
The symbols that play a role in my work are the motifs that are used by the N’dyuka. Decorating tools and implements is an ancient custom ; for example: doors, plates and stools.
The decorative patterns not only make the objects more beautiful; it is also a way of conveying a message – without words to a loved one.
In olden times the decorating techniques were a means of communication, used in particular to get a message to someone close; the decorations also served to distinguish these objects from others. Nowadays only the beautification aspect seems to be important.

‘Visual artist’ Marcel Pinas does still use symbols as a means of communication: he has a message for society and he also sees himself as a safety valve for this society. His art articulates more than merely an individual observation. Pinas: ‘Art’ is very important in any society. ‘Art’ is not only for the rich, it is also for the man in the street. I want to reach the common Surinamese people with my installations and introduce them to modern art. ‘Art’ nurtures the community.

Pinas’ canvasses, which make up the principal part of his work, underline his intention to preserve elements from the N’dyuka culture also in the present day.

Colours which generally have their origin in Surinam’s multi-coloured nature, are liberally applied to the canvas. Significant symbols, parts of implements, pieces of fabric : there is always something extra in the work of Marcel Pinas. The wealth of the culture is reflected by the canvas and leaves it’s mark on the objets d’art’.

On the 22nd of March 1971, Marcel Hendrik Pinas was born in Pelgrimkondre, in the district of Marowijne in North-East Surinam.
I was at boarding school with the friars near Moengo and Moiwana, two villages that played such an important role during the Interior War. There is nothing left of the village he was born in ; ‘Where I grew up,everything is gone. It is like a dream : you see it, but you don’t actually see it. Everything has disappeared due to the civil war’.
‘From my first year in elementary school on, I was at boarding school in Abadukondre with the friars and sisters near Moengo. I would go home one weekend a month. During my years at secondary school in Paramaribo I became even more alienated from my culture ‘Y’e du lek’ wan dyuka !‘ was not something you wanted to hear.

Even as a child Marcel made lots of drawings. At the age of sixteen, he started taking classes at the Nola Hatterman Institute which is closely associated with the Ministry of Education and Community Development. He also studied at the Anton de Kom University (ADEK) and the teacher training institute, both in Surinam.

In 1997, he was granted a scholarship by the Surinam goverment to go to the Edna Manley College of Visual and Performing  Arts in Jamaica. For two years he took visual art classes there. He was elected top student of the 1999 graduation class. Pinas also participated in various workshops with foreign artists, both in Surinam and abroad.

In 2002 he was awarded ‘ the Business Finance Art Award ‘ in the Jaarbeurs in Utrecht, The Netherlands, for being the most outstanding participating artist.

In Germany he won first prize for ‘Moved Wind Art’, a special installation in which Pinas interlaced N’dyuka cultural heritage and the German landscape in a singular manner.
From 1992 until now he has been associated with the Nola Hatterman Institute as artistic staff member.
He regularly exhibits his work both in Surinam and abroad Guiana, French Guiana, Brazil, Jamaica, Trinidad, the United States, Switzerland and Germany are all countries where Pinas’s work has been exhibited. There are plans also to focus even more on national and international Land Art Events in the future.

Marcel’s desire to reach the broadest possible audience with his work (and the message it carries), is easier to fulfil with this type of project :
Marcel Pinas :’The moment the work is placed in a public space the confrontation begins’.

Marcel Pinas was introduced to Beddington Fine Art by Vincent Vlasblom, Hermann and Helena Krikhaar  who showed his work for the first time  at the Fondation Hermann Krikhaar in Salernes, Var, throughout July and August of this year.
He joined Beddington fine Art in September 2007.